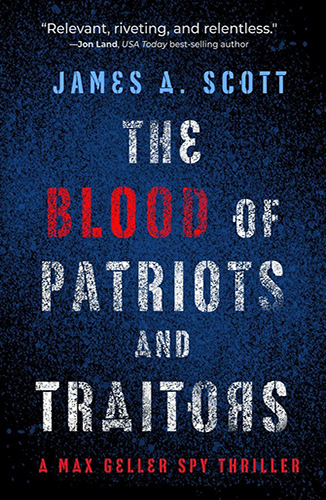 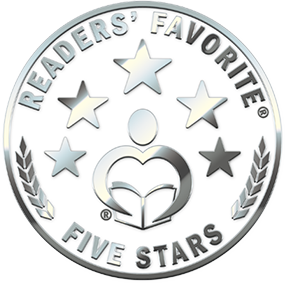 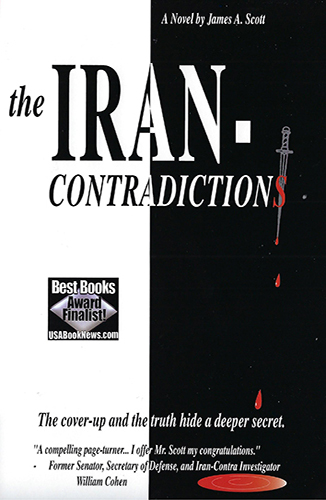 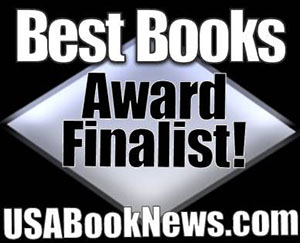 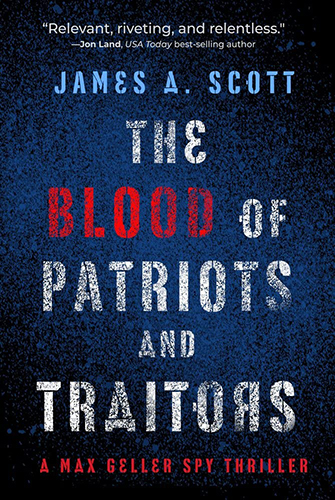 The Blood of Patriots and Traitors

Former CIA Russia expert Max Geller is in Australia, enjoying his sudden wealth in the company of his girlfriend, Vanessa. But this beachy bliss is short-lived when Max is ambushed by the CIA.

Max discovers that his former CIA boss, Rodney, is using Vanessa as a hostage to force him to return to Moscow. His mission? Smuggle out a defector with a secret Kremlin war plan. But is the defector real or bait to lure Max into the hands of his old enemy, FSB Colonel Zabluda. To save Vanessa, Max heads to Russia, with his reliable crew, Jill Rucker, Cherri Layton, and Tony-D covering his back.

Zabluda learns that Max is in Moscow and launches a manhunt, pursuing Max and the defector across Europe and the Atlantic. However, the defector has his own agenda and neither Max nor the Russians are sure what it is. When the Russians seem to know Max’s escape route, the CIA suspects there is a traitor in Max’s crew. Meanwhile, Max is in a race to avoid capture and deliver the defector’s secret to the CIA.

Will he make it in time to foil Russia’s plan? What happens if the defector’s secret puts U.S. democracy in peril? Max must avoid capture and stop the Russians—before it’s too late. And what’s going on with those assassins in Mexico?

“Scott’s solid sequel to … The President’s Dossier…. Strong-armed by his former boss, [ex-CIA agent Max] Geller agrees to get a high-value defector out of Moscow. A high-octane pursuit across Russia and into Estonia ends in an exciting rapid-fire shoot-out scene, but … the defector raises questions about the ability of the United States to [thwart Russia’s war plan]. Daniel Silva fans should check out this timely political thriller.”
—Publishers Weekly

“Plots within plans with plenty of treachery and betrayal—and, even better, it’s all done with the confidence of a sure hand.”
—Steve Berry, New York Times bestselling author

“Overall, The Blood of Patriots and Traitors never sits still with a rollercoaster narrative that pushes its protagonist to his very limits and beyond, creating an action-packed adventure that readers everywhere won’t want to miss.”
—Reader’s Favorite, 5 Stars

“James Scott is a rising star in the world of espionage and international conflict thrillers, in part because he’s walked those streets. His exciting new novel The Blood of Patriots and Traitors fictionalizes the most crucial battleground between America and the new Russia. If you care about Us vs. The New Them, this is the new novel you want.”
—James Grady, author of The Condor series
“The Blood of Patriots and Traitors is a spy novel extraordinaire. Retro enough to allow James Scott to lay claim to the mantel of John le Carré and contemporary enough to evoke apt comparisons with the likes of Mark Greaney and Brad Thor. Scott handles the heating up of the Cold War with a shrewd hand and a master’s touch in a tale that’s relevant, riveting, and relentless.”
—Jon Land, USA Today bestselling author

“Maxwell Geller has more lives than a cat. This spy v. spy thriller will leave you breathless as you chase Max across Russia and the world in a complex tale of government deception and double-crosses that would confound James Bond.”
—Sheila Lowe, author of Dead Letters

Book One in the Max Geller Series

Fired for bias against the president, ex-CIA Russia expert Max Geller gets a chance to reclaim his reputation and make a fortune when he’s hired to prove that the president has incriminating ties to Moscow. Jill Rucker, an undercover CIA agent, works with and against Max to achieve conflicting goals, making their relationship one of mutual attraction and mistrust. The search for evidence takes them to England, Russia, Switzerland, and Panama. Max is targeted by British intelligence for compromising its agents. He gets help from the anti-Putin underground, threats and assistance from the Russian mafia, exposes a massive Russian-American money laundering scheme, and uncovers a plot to protect the president from impeachment. Meanwhile, Kremlin assassin Zabluda means to kill Max and Jill, and destroy evidence incriminating the US president. Max is betrayed by his former boss, his current employer, and his girlfriend. To get revenge, he takes on the CIA, the Russians, and a Washington law firm.

“Scott injects enough spycraft, betrayal, and mayhem to keep the pages turning. Fans of espionage thrillers will be pleased.”
—Publishers Weekly
“This is not like most espionage thrillers where the stage is dominated by men.
Here, there are bad-ass women too who are up for the job.”
—The Feathered Quill
“An international thriller of the highest order that enlightens even as it terrifies. A smooth hybrid mix of Brad Thor, Brad Taylor and the late great Vince Flynn that’s as relentlessly paced as it is sumptuously realized. Not to be missed for fans of high-stakes, high-action thrillers.”
—Jon Land, USA Today bestselling author
“Brimming with history, reality, intensity, and passion, James Scott draws the reader deep into his carefully crafted web. You’re going to enjoy the pulse-pounding escapades.”
—Steve Berry, New York Times bestselling author
“A well-plotted, action-packed, and fast-paced thriller with all the ingredients that make for an edge-of-the-seat reading experience. The President’s Dossier is a fast read, as exciting as it can possibly get.”
—A Readers’ Favorite five-star review 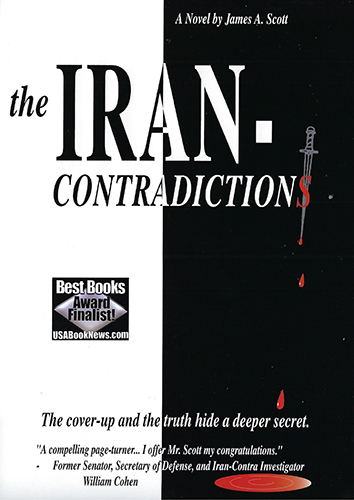 A gritty alternative explanation for the Reagan era Iran-contra scandal, involving Vietnam War secrets worth millions and Hezbollah hostages. The mission: steal the money, kill a hostage, and frame the President. The action rages from Washington to the French Riviera as investigators attempt to save the President and outsmart assassins, Swiss bankers, crooked POW/MIA negotiators and Vietnamese Intelligence.

“From start to finish, this book delivers! With a convincing plot, strong characters, and plenty of twists and turns, this book is one you’ll read well into the night . . . The plot twists will really keep you guessing.”
—Denise Moore, Amazon 5-star reviewer
“A great read! . . . fast-moving story with lots of twists and turns . . . Just when you think you have a handle on what’s going on, you get another surprise. It’s [hard] to put the book down.”
—Dick Snyder, Amazon 5-star reviewer
“An absolute page-turner . . . didn’t put it down . . . completely intriguing . . . If you find yourself browsing the same old authors, looking for something fresh but good, try this book. You won’t be disappointed.”
—Matt Dooley, Amazon 5-star reviewer
“Captivating . . . certainly on par with products by Dan Brown or Robert Ludlum . . . I chose it as my selection for my book club . . . A great debut.”
—Ann M. Green, Amazon 5-star reviewer
“One of the best international intrigue books I have read. I rank it right up there with the early Robert Ludlum books. Jim Scott is a talent a cut above authors such as James Patterson or Len Deighton . . . I recommend this exciting book to any avid reader of international intrigue.”
—Barbara N. Roberts, Amazon 5-star reviewer
“A ruthlessly smart thriller. Finally, an original mystery . . . I was amazed at each turn of events . . . Fast paced, ruthless, with a shocking ending. This is a MUST read for anyone who wants more than a formula crank-em-out mystery. WOW!.”
—Alexi Hilton, Amazon 5-star reviewer
“A definite page turner . . . Loaded with intrigue, thrills and action galore! Mr. Scott has written a real winner here and I highly recommend that others take it up as well!”
—Brian Springfield, Amazon 5-star reviewer